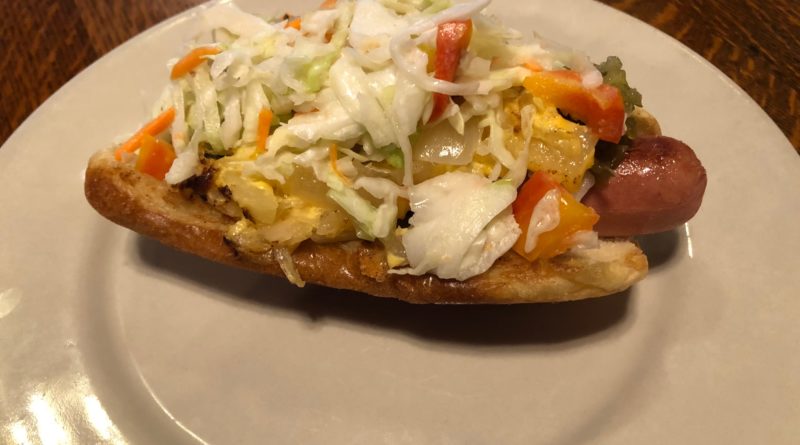 If you’re not from Atlanta then you may not know that Manuel’s Tavern has been around since 1956 and has a good bit of history behind it. Not a chain restaurant, from their website:

“Although major political figures regularly drop by the Tavern, it is also a gathering place for blue-collar workers, the press, writers, actors, policemen, and just about anyone else you can imagine. The Tavern represents a true cross-section of the Atlanta community.”

The menu has a nice variety of tavern staples. And since we’re a big fan of the humble hot dog here at the Den we’d be remiss not to include Manny’s on here. I went with the Loaded Ballpark Dog since my fiance said watching me eat the Loaded Dogzilla would be gross (will have to review that when she’s not with me). It’s a simple hot dog augmented by chili, cheese, kraut, onion, relish, and slaw.  Unfortunately we’ll have to subract a few points for using chili with beans in it. This goes against my religion, beans are little bags of mushy dirt and weren’t meant to be consumed by humans. So I asked them to hold the chili. The dog is a monstrosity and explodes with a great mix of flavor and texture. It’s got the classic hot dog flavor reminiscent of the only thing that made attending those boring baseball games your dad made you go to when you were a child worth it. The slaw and kraut add a tartness and crunch. The relish is sweet, why anyone would choose sweet relish over dill is beyond me, probably the same type of person who likes beans in their chili. All in all it’s a great dog, and it’s only $4. We give it two thumbs up and 3.5 out of 5 stars.

For our side dish we got a plate of nachos but instead of chips we got tater tots. If you haven’t done this I don’t know what you’re doing with your life. Just do it! Tots are great, nachos rule, so smash it all together and you get Tachos.