Well somebody at Arby’s has evidently heard my cries and brought back the item that originally got me through the door after nearly a decade of thinking that Arby’s simply didnt have much to offer. At long last (again), we can enjoy a psuedo-Gyro from a fast food giant. Sometimes you just dont want something in a bun, and your only other fast food option when 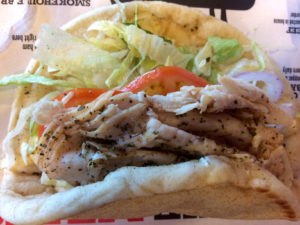 you feel that way is pretty much Taco Bell. Their gyro is fairly basic, it’s a somewhat squishy pita filled with your choice of roast beef (if were still calling it that) or turkey (I dont think its made from a gelatinous substance like their beef). I opted for the turkey because lets face it, who wants to eat meat that you should wash down the drain before it got cooked (look up Pink Slime is you’re curious). Its actually got flavor and left me feeling full while not disgustingly so.

Anyway, so Ive gotta give this thing 4/5 stars. Its honestly a good menu offering. I award huge points for doing anything thats not par for the course sandwich spam with more bacon & ranch, and overall this thing carries itself like a tasty pita wrap with a decent Tzaziki sauce to tie the ingredients together. You’ll find generous portions of lettuce, tomato, and fresh onion in there which makes it feel like youre not dying faster simply by eating it. Lest you get too healthy, be sure to ask for a cup of cheddar to dip your fries in. I’m sure as soon as you start eating one of these periodically Arby’s will get rid of it again, they just cant seem to keep anything around for too long that’s both good and semi-healthy (Angus cold cut. bring it back, it was a real sandwich, and the banana peppers were a nice touch). So you better eat it now while you still can!